And what a year it was. Maybe I’ll try to post more frequently here on the Foodnerd in 2017. I do still cook things. Hugs to all of you that still have me in your feed even though I’ve not given you squat for content in basically five years. That’s what building a local dance scene does to your food bloggery, apparently. Love to all, and let’s fight the good fight!

One of my most loyal readers, my dear friend’s father Mr. N, passed away recently. It makes me sad whenever I think of my silly little blog now, but I am glad we were able to connect in that way. And it reminds me that whenever we think that no one cares, that our work is inadequate, that our efforts are pointless, we are almost certainly wrong on all counts. Keep on doing what you do, people.

Occasionally when I eat something spicy, it immediately triggers a bout of hiccups. That happened to me today with the first bite of spicy butternut squash soup, right before a client phone call. For some reason, I just then craved dried sour cherries specifically, and I had the sudden thought that eating them might cure the hiccups. Which was completely bizarre and obviously bullshit, EXCEPT THAT IT WORKED. Instantly. First cherry in the mouth, hiccups gone. WTF? But AWESOME.

In other news, it looks like we have a denial of service comment spammer on the loose, so for a while, your comments may get deleted in the great purges presently underway.

I’ll be doing a Vietnamese Week with a friend the second week of December, so that should be pretty fun.  Aiming to try a bún bò Huế among other things.

Tonight we went to Molana in Watertown, because our new favorite Persian restaurant Shiraz was locked up tight as a drum, hopefully just for the holiday weekend.  Happily Molana was a lot better  than the last few times in both kebab kubideh and service, so maybe they’ve gotten their act back together.  We still prefer Shiraz, though, because the kubideh is better and they have That Bread which would be enough to win me just on its own.  http://www.shirazcuisine.com/ — but watch out, it plays music, ugh.

We wrapped the Thanksgiving turkey in 3 pounds of bacon again, and as usual, delicious.  Starting out with oven temps under 600F and skipping the oiled cloth made for much more edible bacon.  I may or may not have eaten half the skin+bacon before we even sat down to dinner.

An awful lot of stuff happened this year.  Nothing truly bad, but it’s been a struggle to keep up — a lot of unexpected home repairs and a really big investment in dance event organizing and more to do at work than average — and the result was no time at all to post on the FoodNerd.

Sorry about that.  I imagine you’ve all gone off by now and given up on me, and I couldn’t blame you.  But if you have me in your RSS reader or otherwise stumble back across me, welcome back.

The most recent kitchen adventures have been related to the winter holidays:  ajil and milk punch.

Ajil is an Iranian trail mix that is made and eaten on the winter solstice night, when people stay up all night to ward away evil.  I found the recipe in a recent issue of Saveur, and it sounded awfully good.  I thought it might make a nice hostess gift for people on our trip to LA.  So I went to the Armenian markets in Watertown to see if I could dig up the necessary ingredients.  No one seemed to know what I was talking about when I asked for sugar-coated slivered almonds, but at the last store I found them on my own, in a huge display of every kind of candy or dried fruit you could imagine.  They had dried mulberries too, which look just awful, like dusty old stuff swept out from under the fridge, but they taste pretty good so don’t be alarmed by their appearance.  The salted whole pumpkin seeds are wonderful if you treat them like a salt lick, but I can’t work out any method for actually extracting the seed, so I punted and just used shelled pepitas instead.  I also altered the recipe by adding in some shelled pistachios along with the ones in the shell.  Roasted chickpeas are kind of bland and dusty-tasting on their own, but they are a nice element in the mix of stronger-flavored nuts and fruits.  The end result is quite delicious, and very pretty with the greens, golds and browns punctuated with tiny flecks of bright white.

Milk punch is a historical drink with roots in the 1700s.  I first had it at Backbar in Union Square, where it was a crystal clear, sweet, bright thing with strong notes of clove.  It was so delicious and unusual that I wanted to try making some myself for a party, so I googled recipes.  Nothing sounded quite like Backbar’s version, so I made up my own recipe.

I started with Basil Hayden, just because bourbon is delicious and I had some in the house.  I used zest of 2 lemons and 1 satsuma mandarin, plus 1 cinnamon stick, 6 allspice and 4 cloves, plus a grating of nutmeg and a spent vanilla bean husk.  The zest and spices are heated in a quarter-cup of the bourbon just to boiling, then poured back into the bottle and left for 48 hours, shaking occasionally.

Then you strain the infused liquor into a big bowl or pitcher, ideally something with a pouring spout, and add 1.25 cups fresh lemon juice and 1.25 cups rich simple syrup.   Then scald 2 cups whole milk just under boiling point, and add it to the booze/citrus mix.  It will curdle right away, but let it sit about an hour.

Then strain through cheesecloth or muslin.  Then strain it again through a coffee filter.  If you can, strain again through another coffee filter to get it as clear as possible.  Pour it into clean bottles and keep it in the fridge, if you can keep people away from it long enough to have some to store.  Your 750 mL bottle of bourbon will double in volume, so you’ll want another empty liquor bottle to store the other half of your batch.

This came out a pale yellowish-brown, and quite tasty in a lemony holiday-spice sort of way.  The bourbon flavor comes through, but even people who don’t care much for bourbon have enjoyed this: the sweetness, smooth mouthfeel, and spice give it a wide appeal.  I’m guessing Backbar used a vodka base, and less citrus juice, or perhaps they just have an industrial strength filtration method that gets theirs so clear.  In any case, the method rewards experimentation and swapping of ingredients to your personal taste.  I’ve just started a second batch with the same recipe, but with peel of 3 lemons and no satsuma, and a splash of vanilla extract, since I lack both oranges and spent vanilla beans at the moment.  There’s also a few lovely options using gin and other flavor profiles from Randy Wong, whose basic method I pilfered. 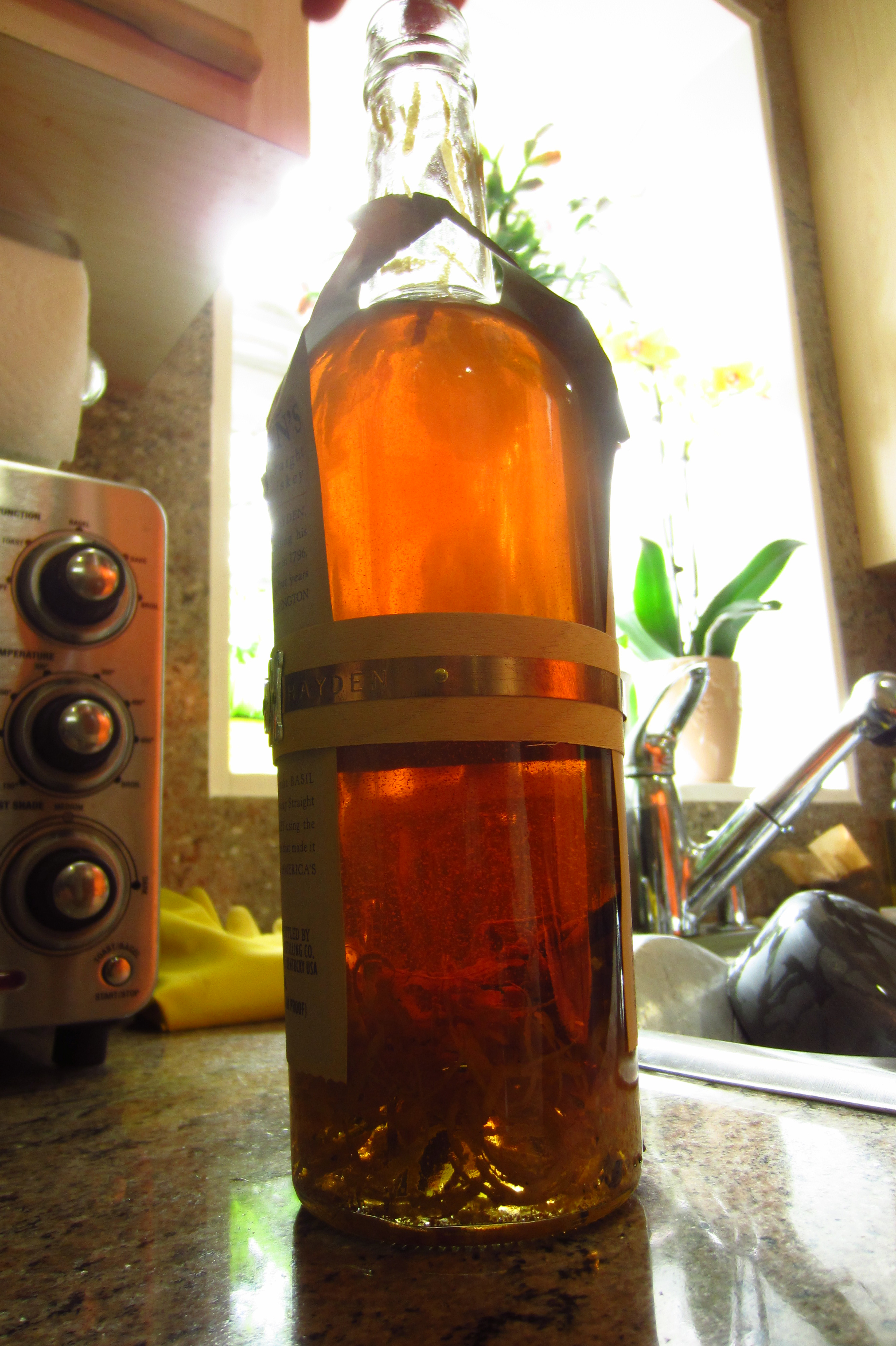 We made a cheesecake from the leftover boozy-spiced curds, which aside from a grainier texture than we’d prefer was really rather delicious.  I recommend it if you can’t bear to toss out the filtered curds.  The pair make a nice combination for a party or potluck, as they do taste good together.

So I have something of a condiment problem in general, insomuch as the doors of my fridge contain almost exclusively condiments, with some extra and oversized items kicking around on the main shelves. And I do USE all these things, it’s not just a compulsive acquisition problem.

Surprisingly, given this, I have very little patience for pointlessly exotic condiments, like Mama Mona’s Homestyle Cranberry-Horseradish Mustard and so forth. Just mix some goddamn mustard with preserves and be done with it, jeez.

However, it has come to my attention recently that my condiment dictatorship does recognize a remarkable number of distinct mustards that should be kept available at all times.

Today I ran 2.973 miles in 30 minutes. For those of you doing the math at home, that is really close to 10 minute miles. Hell to the YES, bitches, I am Speedy Gonzales over here. I could barely squeak out 1 mile in 10 minutes when I was in high school, and then only because they forced us to in PE class. La la la, yay for me… and on top of it all, it is warm out, and sunny, and there are crocuses AND snowdrops in my yard. Things are looking up.

One of my foodwhore pals is going to be housesitting in Melbourne (Croydon, to be specific) for a month sometime soon, and she’s on the lookout for congenial types who might A) point her in the direction of delicious things and/or B) join her for a meal or grocery shopping junket. She’ll find things on her own but it is more fun to have random hookups occasionally with friends of friends (or friends of random internet food-obsessives who read my blog).

I have not had a comment on the blog for ages so I wonder if maybe it’s broken? If so, email me at foodnerd -at- paisleysky -dot- net.

100 Southern Foods to Eat Before You Die

So much awesomeness. Though I would posit that perhaps eating one’s way through this list would by definition shorten the time one had to accomplish the task.

I’ve been away on a work trip to Zimbabwe, my apologies for the silence. It’s not going to get better very soon, as it’s going to be busy a while longer. But for now, a list of the things I have seen Zimbabwean women carrying on their heads. No hands. It is amazing and awesome and I am envious of this skill.