I love soup — broth-based soups in particular. It’s a comfort food for me; strange, I suppose, for someone who grew up in the temperate climate of southern California, but I guess it is what it is. Of course, now that I live in New England, I appreciate a bowl of nice hot soup even more so.
Growing up, Mom made two soups that I remember in particular: ham hock soup and wintermelon soup. To be honest, I don’t really have a clear idea whether these were actually two distinct soups or if she would just make ham hock soup and put different things into it, wintermelon being one of them. The memories of the warm savory broth and the delicate, semi-translucent chunks of melon go hand in hand. So when I think of one, I always think of the other.
Over the years, I’ve had cravings for these creations, but never could find the proper ingredients in the local markets. I did find a smoked pork hock at one point, but the resulting soup did not pass muster, let alone reach the warm soupy goodness that I remember. (Frankly, it was just BAD.) 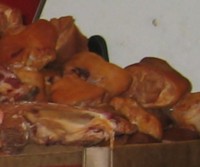