I’ve previously mentioned my love of clear broth soups. But my true love is actually noodle soup.
For some, their idea of comfort foods are things like meatloaf, mac ‘n cheese — which I totally get. But growing up, on those cold, gray and rainy days in southern California (no, seriously), it’d be a bowl of ramen noodles that warmed me up.
In high school, when we were allowed to leave campus, we’d sometimes have back-to-back free periods which would give us an hour and a half to make the half-hour drive down to Chinatown, eat at California Beef Noodle King and then drive the half-hour back just in time for AP E&M.
Yeah, I love me some spicy beef noodle soup.
There are several restaurants in the Boston area that serve nu ro mian (beef meat noodle), but none has ever been quite what I was hoping for. Tai Shiang Garden in Chelmsford was the first — a close enough approximation, but slightly off on both the broth and the noodles (they use what looks like udon). Chung Shin Yuan in Newton and Shangri-la in Belmont have both been pretty good — the broth is almost exactly as I’d like it (with some day-to-day variation), but they both use noodles that remind me of linguine.
A few years ago, I finally decided to take measures into my own hands. I got a recipe for the soup base (beef/tendon and broth) from Mom and tried making it myself. Combined with some fresh noodles bought at the Super 88, we were pretty happy with the results. (I tried making my own hand-pulled noodles, but that experiment was an unmitigated disaster.) But we ended up with an awful lot of meat and broth. The solution? Invite friends!
And thus, Noodlefest was born.
The first year, we provided both the beef broth and a pork broth (made from Magic Hocks) for a secondary pork and pickled cabbage option for our non-red meat eating friends. No allowances were made for the vegetarians. (Sorry guys, but you can’t please all of the people all of the time.) We suffered through a few logistical problems — inadequate rate of noodle availability, bowl shortages, and the pork broth wasn’t quite up to expectations (guests were happy, we were disappointed) — but overall, things went well.
That year, we also tried to cap the number of guests, fearing that we’d run out of soupy goodness. It was close, but things worked out fine, and I think we ended up having soup noodles for an extra couple of days.
Emboldened by the previous year’s success, this year, we decided to step it up a notch: open invite, make more food.
We had a better handle on how much food we needed. We figured that we had ironed out some of the logistical problems that we had had with production. We even did a few preliminary trials of broth for the pork and pickled cabbage.
And to address our tableware resource issue, we made it BYOB — bring your own bowl. (We still bought extra chopsticks and soup spoons.)


* * *
So, here’s the beef:
(the numbers in parentheses are the original amounts used to make a normal batch.) 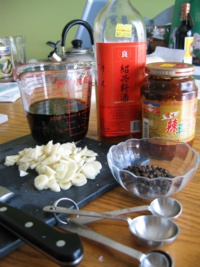 Soy, wine, paste, garlic, peppercorns.
(1-1/2) -> 5+ lbs. Stewing Beef
(1) -> 2 lbs. Beef tendon
(5) -> 15 cloves garlic
(5) -> 15 green onions
(5) ->15 slices ginger (probably 1/8″ cross-sections)
(3) -> 9 star anise
(1) -> 3 T brown peppercorns
(3/4) ->2 cups soysauce
(2) -> 6 T wine
(1/2) -> 1 cup oil (approximate)
(3) -> 9 T hot bean paste
1. Cut beef and tendon into cubes and cook for a minute in boiling water.
Stew beef is convenient here because it’s already mostly cut up for you. I ended up cutting some of the pieces down. I’d also recommend getting the tendon cut for you at the market.
As an experiment, I tried cooking the larger pieces of tendon and then cutting them up after the first hour of cooking, but I don’t feel like the flavor got into the tendon as quickly, and it seemed to take a little longer to cook sufficiently.
Incidentally, I think that the tendon is ESSENTIAL for this recipe even though there are plenty of people that are grossed out by it. Even cooked, people seem to find its fatty, gelatinous appearance to be unappetizing. But it’s this soft, almost melt-in-your-mouth texture when it’s at its most delicious. It’s yummy like fat, except that it’s not bad for you because it’s tendon, which is, as I’ve learned in my physiology class, all connective tissue, which is PROTEIN! (Not that I think fat is really that bad for you, but I realize that it’s not a popularly held belief.)
Anyway, moving on…
2. Drain off the water and return beef to pot. Add boiling water to 2″ above beef. (I find it convenient to actually have 2 large pots of boiling water so you don’t have to wait for the water to come up to boil again.) Add anise, green onion and ginger. Use low heat and stew covered about 1 hour. 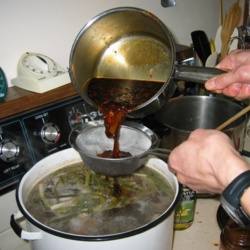 Straining the oil mixture.
3. Heat oil in another pan, when hot add the garlic and peppercorns and stir fry till brown. Then add hot bean paste, soysauce and wine. Bring to boil, then lower heat and cook for 2 minutes.
And now a word here about the bean paste. When we first tried to make this recipe, the bean paste was probably the hardest thing to get. Not because it was hard to find. No, the problem was that when we got to the sauce aisle in the Super 88, FoodNerd and I were confronted with a whole section of spicy bean pastes, different brands, different beans, different ingredients. We ended up leaving the store with two bottles and have since decided that Ming Teh brand broad bean paste with chili was the way to go.
4. Strain oil mixture into the beef pot and stew until beef is tender.
The original recipe said something like another two hours, but we’ve found that it takes about six for the tendon to really soften up.

* * *
The pork noodle soup broth is a bit simpler. It’s a basic chicken stock supplemented with a little ham to round out the flavor. The goal was for it to have a rich, savory flavor while still being clean and light. I think the key ingredients are the ginger, cooking wine and white pepper. It’s got to be good and peppery.
2 lbs chicken
1/2 lb Virginia ham (salty country ham)
5 green onions
5 slices ginger
1 cup cooking wine
white pepper
salt
The above is only an approximation — we mostly did things by taste.
We first par-boiled the chicken and ham the same way we handled the beef in the beef broth. It’s a nice way to get some of the gross stuff out of the meat. After replacing the meat into a fresh pot of boiling water (we topped off a 2-gallon stockpot), we added the green onions, ginger and cooking wine and then reduced heat to a simmer.
After cooking for several (4-5) hours, we added a bit more cooking wine and generous amounts of white pepper and salt to taste. Remember your goal: peppery and savory. (FoodNerd says also “piquant.” That’s the last little shot of wine into the broth.)

* * *
We also made a second beef broth to supplement the primary stew broth.
A quick run down: beef neck bones, browned in oil in a large stockpot (I think it was FoodNerd’s 3-gallon pot), then sweated (covered) in cooking wine. Filled the pot with water and added ginger (a few slices), green onions (5-6?) and soy (maybe a cup). Cooked the crap out of it. (The usual — bring to boil, then reduce to simmer for, oh, maybe 5-6 hours.) Season to taste with white pepper, salt and more soy. Supplement with chicken broth. (I think I added a 1-quart container of store-bought broth.)

* * *
So, those were the broths. For the pork and pickled cabbage, we sliced pork (tenderloin? cutlet? steaks?) into thin strips and marinated in soy sauce, sesame oil, cooking wine and corn starch. This was stir fried at high heat and then added sliced up pickled radish and greens. This has been another difficulty — finding the correct pickled greens. We ended up using a mix of various types without properly documenting them. Sorry. And still we really haven’t found the same type that is used in the restaurant soups.
It all comes together with the noodles. As mentioned, my chief complaint with the commercial sources of these dishes is that they use substandard noodles. That’s what it’s all about. It can make or break the dish for me.
Since making them myself has proven to be a non-starter, the next best thing has been to buy fresh noodles from the the 88. I’ve liked two brands, and both are simple flour noodles that are labelled as “thin Shanghai style” noodles. (The Twin Marquis brand that calls them “plain noodles (thin)” actually labels them as Shanghai noodles in Chinese characters. Amazingly, my studying hasn’t gone completely to waste!)
The previous year, I was trying to cook the noodles to order. I’d throw a bundle in for 2-3 people, cook them up and then fish them out. I’m not sure what I was thinking — like I was expecting a bunch of people to come in, and half of them would say something like: “Hey, noodles. Cool! Do you mind if I just hang out here and watch some of y’all eat?” Yeah, so cooking small batches of noodles one at a time — dumb idea. I’m inviting people to Noodlefest. When they show up, they’re all gonna want to eat noodles.
Duh.
I ended up spending a lot of time trying to fish out a bunch of cooked noodles while the water was still boiling, putting them straight into people’s bowls, and then putting another batch in. And as the evening worn on, not only had I scalded my hands a couple of times, but the cooking water got thick and cloudy with all the loose flour that was on the fresh noodles to keep them from sticking to each other. It was gross. At some point, we ended up dumping the water and starting fresh, which of course took more time.
One of the reasons for this was a lack of burner space. I think we had two giant stockpots on the stove, a skillet with the pork and cabbage and then the pot for cooking noodles. And it was a tight fit since they were all oversized pots. 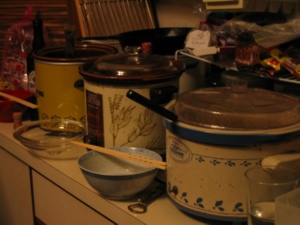 Stockpots: the final solution.
The solution: crockpots!
One crockpot was dedicated to the chicken/pork broth. The other two were used to hold beef broth. The beef and tendon, topped with broth, went into a separate pot. And we precooked the pork and pickled cabbage and put it in a cassarole dish set on a warming tray.
This freed up the stove for two pots in which to boil water for cooking noodles. While one pot was cooking noodles, filled to capacity, we could bring water up to boil in the second pot. A third burner was used to cook down spinach in the beef broth.
When the noodles were cooked, I strained out the water, dumped the noodles back into the pot with cool water to stop the cooking. That’s key: you don’t want the noodles overcooked — it’s important for the noodles to have a little chew to them.
Then, serve into bowls, add spinach and beef (and tendon, for a few), and then top off with broth. Add a dash of chili oil if you want a little extra zip. Similar process for the pork and pickled cabbage, but we let the pork be serve yourself — I just doled out noodles and broth.
A cold and snowy week in February: not the best weather for travelling, but perfect for some noodle soup. We had a few no-shows, but I think we still ended up with over 20 people. Sharing the love.
All told, a good night.